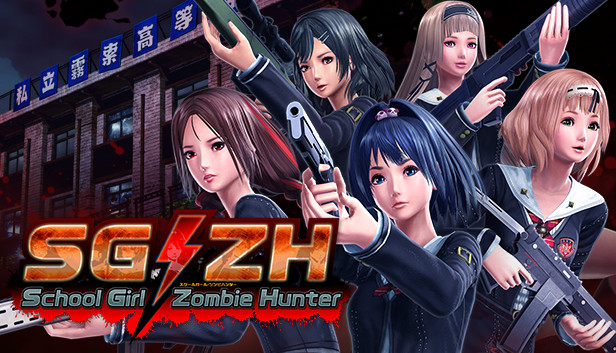 More to the point, I love JRPGs, those awesomely bizarre role-playing games made only in Japan. Over the years I have been more hesitant to download random JRPGs based on the steady decline of things like graphics, gameplay and overall storytelling (Example: I enjoy the anime JoJo’s Bizarre Adventure but the video game based on JoJo’s is hard to sit through). The one thing that has the ability to negate my hesitance every time is a good sale, and this past month PlayStation has had one hell of a sale on random digital media.

School Girl/Zombie Hunter is a zombie apocalypse based JRPG that’s regularly priced at forty dollars. I’ve seen this game around the bin before, hesitant because it looks like an Otaku’s wet dream, filled with schoolgirls in skimpy outfits with weapons and monsters. But thanks to the PlayStation sale, you can snag it until January 17th for twelve dollars and change. I decided to take the chance on its random quarks and skimpy outfits, thinking at worst, all I lost is twelve bucks.

The game starts out simple enough, you are Akiha, a schoolgirl lost among the zombie hordes and you have to escape before they devour you. After the initial

tutorials you meet the rest of the cast via the first chapter’s mission-based levels. Each stage is properly labeled as destination, extermination, survival or fetch, letting you know exactly what to expect between fight or flight objectives. It has a Lollipop Chainsaw vibe, with over the shoulder mechanics and surprisingly impressive graphics.

There are five girls in total, all with their own special features from healing without health items and invincible counter attacks. Each school girl can also carry multiple weapons of each type, something the game isn’t completely clear on at first.

There’s the ring leader, the ring leader’s unsure best friend, the loner with a childhood friend who is dependent upon the loner but is still optimistic in the face of danger… and the superstar. Each character hits their anime tropes flawlessly, with enough move-a-long dialog to make you cringe. There are large chunks of dialog that don’t make you want to roll your eyes, and it’s well worth putting up with the lame anime tropes just to get to. These moments really add depth to the five characters. You might not love them, but you’re happy to be on this journey with them.

The zombies themselves are not much at first. The simplest ones merely shamble about and lunge at you when they get close enough. They quickly escalate in difficulty by the time you reach chapter two. It’s also in chapter two that the game taps into classic Japanese horror with grotesque monsters that resemble the ones in movies like Tokyo Gore Police or John Carpenter’s The Thing. It’s not until the end of Chapter 2 that you meet the game’s villain, Ren, a glammed out talking zombie. He’s the A-typical anime villain who you ultimately go on to defeat, setting everything right.

Constant waves of enemies are the norm through five chapters worth of story. Chapters that are broken up by multiple levels apiece, with a few sub-missions thrown in for the sake of random fun and item collecting. Some levels feel tougher than others, with a high rate of regenerating zombies. Fortunately, certain areas are blocked off at each level so you won’t get completely lost racing from point A to point B.

Collect Everything, Even Underwear

School Girl/Zombie Hunter is not short on collectible items. Between weapons, outfits, shoes, and underwear, you’ll spend a lot of time trying to figure out where

each new thing is. You’ll need to work towards unlocking items by killing zombie birds, leveling up each character and completing certain tasks. There are times where a random outfit is just sitting out in the open waiting for you to snag it, while other times you’ll have to kill enemies and hope they drop something new. With the amount of underwear in the game, you’d think Team Ninja had a hand in the game’s creation. I know for a fact they did not help out because there is no age meter in the options, allowing you to increase the bounce of the character’s boobs.

If you’re a trophy hunter like me, you’ll spend a couple of extra hours of gameplay locating everything. It’s not overly difficult, just time-consuming.

Almost every mission pre-selects your character, once you have completed the mission, you can replay each level using whichever school girl you like (something you’ll need to do if you want to collect everything). Each mission also sets a time limit, something you want to keep in mind when exploring and destroying mass amounts of zombies. It’s easy to lose track of time when the zombies are constantly regenerating all around you.

It starts out as a lot of fun, but with the extra sub-missions and increasing zombie hordes that elongate how long you spend in level, at one point you might just decide to skip the cinematic moments just to get through a few chapter levels.

The most impressive part of this game is its load times. Each load screen lasts no more than ten seconds, long enough to hear one of the five voice actors say the phrase “School Girl/Zombie Hunter”. Honestly, the load screen was my favorite part of the game overall. I don’t know how to explain it, its just one of those anime tropes I’ve grown fond of.

I feel the same way about School Girl/Zombie Hunter as I do with the movie Can’t Hardly Wait. It’s severely underrated and a whole lot of fun if you give it a chance. So far, the value of this game, on sale, is excellent considering you are getting over 30 mission-based levels for twelve dollars. Throw in the worthwhile anime moments, replay quality, an endless amount of weapons and collectibles and this game is surely worth a detour from whatever new game you are currently grinding.

Tips and Side Notes

And so I leave you with this, the anime opening theme to School Girl Zombie Hunter. If this doesn’t make you a believer, I don’t know what will.

Also, check out your favorite cast members of #mtrpodcasts on our new comic strip – Attorneys At Claw. Check out the misadventures of two cats doing their best to make a living in this cat-eat-cat world. Mr. Whiskers is based on Rob Lee and Dash is based on Dann D. Attorney’s At Claw is like Nelson/Murdock but with our favorite pot-smoking felines

Ranking All 22 Marvel MCU Films — Thoughts From The Bench

This is something I have wanted to do for so long and now that Endgame has come and gone i thought this was the appropriate time to rank...